Following on from the Grenville Millington article, another former Chester player played a key role in the Great Britain team that reached the Semi-Final of the football competition at the 1948 Olympics in London. Eric Lee played in all of Britain’s fixtures in the competition and by all accounts emerged with a great deal of credit. Legendary former Manchester United manager Sir Matt Busby, who coached the Olympic team, rated him as potentially one of the best half-backs in the game at the time.

Eric was born in 1922 and signed for Chester after being spotted by manager Frank Brown as a 17 year old playing in local football for Hoole Alex. During the war he served in India and Burma and made his full debut for his home-town club in the first post-war fixture at York City in August 1946. Over the next 11 years Eric played 363 league games for Chester placing him fourth in the list of the club’s Football League appearances. In recognition of his service he was awarded a benefit game against Liverpool in 1952. 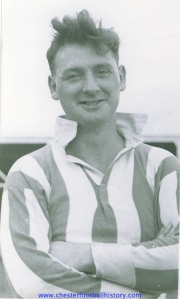 Throughout his entire time on the books at Sealand Road Eric remained as an amateur as he advanced his career in teaching. Chester themselves offered Eric a professional contract and at least one other unnamed club offered a similar deal but, perhaps with an eye to the future, he turned them both down. Although this decision cost Eric the opportunity of playing at a higher level it did open the door for him to represent his country at an amateur level. During the 1946/47 season he was a regular at left half for Chester where his performances earned an England amateur call-up against Wales.

By the following campaign Eric had started his teacher training at Loughborough College which restricted his appearances for Chester. These limitations did not always go down well at Sealand Road and it appears that there was some discussion and doubts about whether the Chester team should be disrupted to accommodate him.

Despite these doubts and a lack of match practice, a late call up to appear in a representative game against a University eleven in Bristol saw Eric impress the selectors who proceeded to pick him for an FA X1 in an Olympic Trial match at Portsmouth in February 1948. The FA X1 consisted of players from the likes of Yorkshire Amateurs, Bromley and Sutton and Eric captained the team that beat Scottish amateurs Queen’s Park 4-0. The Sporting Chronicle reported that Eric had a good game and he was chosen to play in another trial match at Hampden Park in May.

For the second trial Eric furthered his ambition to get into the Olympic team as he played for the Stripes against the Whites. In the first half he played at left half and switched to centre-half for the second 45 minutes as the Stripes won 4-1.

On June 19th Eric was selected at centre half for the final British Association Olympic trial team to play Holland in Amsterdam. Although the British team were beaten by a last minute goal Eric was reported to have played brilliantly and this was followed by the news that he was one of 23 players to report to coach Matt Busby for special training in readiness for the Olympic Games. This good news was accompanied by the announcement that he had also re-signed for Chester with the prospect of increased availability in the new season.

A final warm-up game was played against France, in Nantes, on July 25th before the Olympic competition opened with a First Round fixture against Holland at Arsenal on July 31st. Playing at centre-half Eric helped Britain to an unexpected victory over the Dutch team and five days later a 1-0 win over the French at Fulham earned the side a place in the semi-finals. The Daily Dispatch reported that Britain’s strength against the French had been in the half-back line and Eric was said to have played better than he did against the Dutch.

In the Semi-Final Yugoslavia deservedly triumphed over Britain by three goals to one but Eric emerged as one of the successes in the game and was described by one radio commentator as “iron-curtain Lee”. Two days later Denmark defeated the British 5-3 in the Third and Fourth place play-off game to deny the players a bronze medal.

After the tournament Eric returned to his teacher training at Loughborough while continuing to establish his reputation at Chester as an ice-cool player, calm under pressure and a master of the sliding tackle.

Eric left Chester in 1957 and emigrated to Canada where he took up a teaching job, initially in Manitoba before moving to Quebec. A Physical Education and geography teacher, Eric took up a position with Saguenay Valley High School in Arvida, Quebec in 1960 where he later became Principal. In 1970 he moved to Ottawa where he lived until his death in June 1999. The two photos below are taken from Saguenay Valley school yearbooks and I’m indebted to Francois Lafortune of Arvida for supplying the photographs and the information on Eric’s life in Canada.

As a postscript the Lee family had a more recent link to the Olympics with Peter, the youngest of Eric’s three sons, having an illustrious career as an ice hockey player. In 2006 Peter was assistant coach to the Switzerland Ice Hockey team at the Winter Olympics in Torino as well as at Vancouver in 2010.