In the lead up to the Olympics there has been a lot of discussion about the Great Britain team and the inclusion of players from Wales, Scotland and Ireland in the British squad. Ryan Giggs and Craig Bellamy have been mentioned as potential members of the team but Chester’s own Welshman, Queensferry-born Grenville Millington, has already beaten them to it having been part of the British squad that played in Bulgaria in a qualifier for the 1972 Munich Olympics.

At the start of the 1970s Grenville was playing for non-league Rhyl having left Chester in 1970 after a single league appearance. The Lilywhites had a strong team having reached the Third Round of the FA Cup in 1971 and the semi-final of the Welsh Cup the following year, beating Chester on the way. Grenville himself was working at British Steel in Shotton and his performances at Belle Vue saw him earn a total of nine caps for the Welsh amateur team. Amongst these appearances were matches against a powerful England amateur side that drew him to the attention of the Olympic selectors. Grenville himself recalls:

“Charles Hughes was manager of the Olympic team and he came to watch Rhyl and also sent a couple of his representatives. As a result I got the call to go with the team to Bulgaria. We trained at Bisham Abbey. It’s a long journey from Rhyl to Chester and then down to Bisham on a Saturday after a game. There was training on a Sunday morning and afternoon before the trip back in the evening for work the following morning. I used to join up with a couple of Skelmersdale players at Chester station but most of the squad were based around London from teams like Hendon and Leatherhead. There were fifteen Englishmen and myself.”

With all the furore about non-English players I wondered if there had been similar concerns in 1972:

“There was quite a bit of fuss but it was different in those days. When I got there I was the only non-English player and also the youngest but they treated me very well. The manager and all the staff were English and the eight member committee consisted of five Englishmen and one each from Wales, Scotland and Ireland. Of course, if there was any voting the other nations would be out-voted so that’s probably why they haven’t been overjoyed to get involved this time because the English always had the monopoly.”

For the games the British team played Bulgaria in a two-legged qualifying game. The first leg was played at Wembley with Britain winning by a single goal but Grenville was not involved. However he was selected for the return leg in Sofia and featured for the Olympic team in two friendlies including a match against Motherwell.

“I was disappointed not to be in the squad for the home leg and I’m not sure how the Olympic selectors found their way to Rhyl from London to see me for the second game. It was fantastic for me to be involved though. I’d never flown before and it was the first time I had been out of the country. The ground in Sofia was packed because it was their main team and with Great Britain winning the first game it added to the atmosphere. I think they had been expected to win in England. 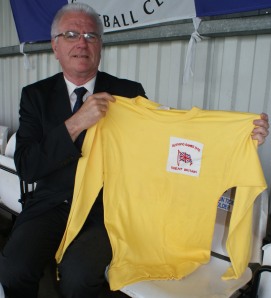 Grenville with his Olympic shirt

“I was on the bench with John Swannell of Hendon, who was a very experienced goalkeeper, starting the game. Although we won the first game 1-0 we were beaten in the second leg 5-0. It sounds a bit harsh but the Bulgarian team was made up of players who were in the army. About three weeks later the Bulgarians played the England professional team and it was the same line-up. We were all amateurs but it wasn’t like that in Bulgaria. I was training after work and had to get permission from work to go whereas in other countries they were pros so it was no contest really. The players were shattered at the end of the game because the bulk of the team had been together for nearly three years. It was the end of the dream for them to play in the Olympics.”

After Grenville’s brief flirtation with Olympic glory he returned to Rhyl and then went to Brighton and Hove Albion on trial.

“I gave up my position at the steelworks to go down to Brighton which was a big move for me because at the time it was a job for life. I was down at Brighton for three months but it didn’t work out so I came back with the intention of joining the police force. However Ken Roberts rang me and asked if I would join Chester and be the understudy to John Taylor until the end of the season.  When he got injured I took over in goal and kept my place so I was offered a contract in the summer.”

The rest is history and Grenville went on to play more than 300 games at Sealand Road until 1983.

As for the Great Britain Olympic team. The early 1970s marked the dying days of amateur football in this country and the distinction between true amateurs and professionals was removed in 1974. For Britain this meant that the Munich games were the last occasion that the FA entered a football team for the competition. With the London games only weeks away, and Britain entering a team for the first time in 40 years, it’s nice to know that Chester has some connection to the event. I’ll be writing about an even stronger Olympic link in another article.