While writing this weeks column for the Leader a couple of things struck me about Saturday’s big kick-off.

First of all, ignoring the new\reformed club argument, Chester will be playing in their fifth different league in five seasons and I’m struggling to think of any other club that can match this unique achievement. For the record the last five seasons read:

I would be interested to know if anyone can think of any other club with a similar record.

Secondly, Chester has not won an opening day game since they beat Accrington Stanley 2-0 in 2006/07 which means it is now six seasons without a win. In fact, since the war, the record has not been particularly good with only 19 wins in 66 opening games so don’t expect big things on Saturday. Even these wins came in batches with six wins in an unbeaten run of eight seasons between 1965 and 1972 followed by a sequence of four successive victories between 1976 and 1979. Since the 3-2 win over Wimbledon in 1979 there have been only six wins in 32 seasons which is an extremely poor return.

David Pugh in the opening day of the 1991 season at Moss Rose. Chester 2 Fulham 0. 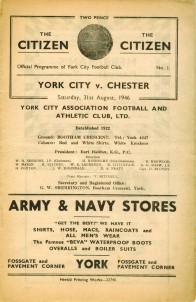 The overall post-war record is won 19 drawn 20 and lost 27. The game with the most goals was the very first match in 1946 when eight goals were shared at York. The biggest win was the 4-1 over Hereford United in 1977 which also marks the only time (besides the game at York) when Chester scored more than three goals. The biggest defeat was the never to be forgotten 6-0 hammering at Dagenham & Redbridge in 2008 when Simon Davies’ team imploded in spectacular style. There were also heavy defeats at home to Northampton Town in 1987 (a freakish 0-5) and, less surprisingly, 1-4 to Bradford City in Mike Pejic’s first game in charge in 1994. The most frequent result has been 1-1 on 10 occasions and both Chester FC games have ended in that scoreline.

Anyone looking for omens before Saturday’s game at Oxford City should be aware that the Blues have never won an opening game following promotion with a record as follows:

Strangely Chester have never won an opening game in a season in which they have been promoted:

Finally my own personal favourite opening day game would have to be the first Chester FC game at Warrington Town in 2010 which finished 1-1 and proved to be a memorable evening. In second place, for entirely different reasons,  would be the 1-0 win at Peterborough United in 2005 when Keith Curle put one over Mark Wright. This seemed a particularly joyous occasion at the time although it soon went downhill from there.

Honorary mentions should be also made of the 2-0 victory over Fulham at Moss Rose in 1991 when the announcement was made that Stuart Rimmer had rejoined the club.  The 1-0 win over Crewe in 1982 also sticks in the mind because it marked the end of a spectacularly dismal run of games which had ended in relegation from the old Division Three. At the time it at least promised the vague hope of a revival although in the end it was yet another false dawn.