Last week I went along to West Cheshire College to see how work on the Supporters Club plaque was progressing. In fact the stone is now almost finished and they are currently painting the letters. The department estimates that it will need between one and two days to complete the job although you need to bear in mind that restoration work can only take place once a week. 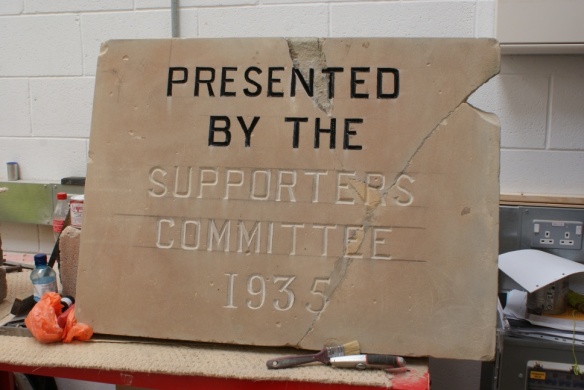 We have been looking at a location for the plaque and hope to install it on the wall between the player’s entrance and the ticket office window, close to the supporter’s bricks.

There is a small piece missing from the right hand side of the plaque and stonemason Altomont Townsend thought it would be better to leave this rather than patch it up. I am in complete agreement with this as it serves to emphasise the restoration work that has been performed. Altomont also pointed out to me the symbolism in the broken plaque and the football club with the repair and return of the plaque imitating the work that the supporters have done in re-building and restoring the new Chester FC.  It also acts as a strong link with the supporters from the 1930s who did so much to help the club in their early years in the Football League.

As well as spotting the paintwork on the lettering, which would have only lasted for a few years, Altomont also had some interesting theories on the making of the plaque. First of all he thinks it would have been made by someone associated with Clegg’s who were based in Bumpers Lane (no relation to tannoy announcer Robbie Clegg). They were the only stonemasons in the city but went bust in the 1970s or 1980s. It is also likely that the engraving was done by an apprentice, perhaps a Chester supporter, rather than by a professional stonemason. He bases this theory on the fact that he identied one or two flaws in the original work and  it is certainly possible to spot that the five in the year does not quite match up with the rest of the date.

If anyone has any further information on the original making of the plaque then Altomont and myself would be very interested to hear from you.

There has been another three victories since my last post so it is time for another update and some more observations before tomorrow’s fixture at Gainsborough Trinity.

Following the 2-0 victory over Altrincham this now stands at an incredible 28 games. As mentioned in previous articles the overall club record is 31 games in the Combination between January 1908 and March 1909. This means that if Chester can avoid defeat against Gainsborough Trinity and Boston United the record will be equalled at Guiseley of all places.

Chester are now unbeaten in 33 league and cup games at the Exacta Stadium. They are fast closing in on the post-war record set between November 1973 and January 1975 when Ken Robert’s Blues were unbeaten in 35 games at Sealand Road. In this current sequence there has been 27 league fixtures, two FA Cup ties, one FA Trophy match and three Cheshire Senior Cup games. This record can be equalled with the last home game of the season against Solihull Borough.

The overall club record was set in the early years of the 20th century when Chester rarely seemed to lose a home game. Between September 1904 and September 1908 there went 42 league and cup games unbeaten. This covered two different grounds as the club moved from Whipcord Lane to Sealand Road in December 1906.

The Blues are now unbeaten in the last 13 away league games a record that stretches back to the Boston United fixture in September. The Chester FC record currently stands at 15 games. This began with the 1-1 draw at Warrington Town in the very first game in 2010 and ended at Lancaster City the following March.

The club record for away league games unbeaten is 17 in the Cheshire County League during the 1930/31 season. The run started with a 3-3 draw at Runcorn in September and was ended by Manchester North End the following April.

If the current run continues the overall record will be equalled in the last game of the season against Worcester City.

The 100 league goal target is looking a formality with only three more needed to reach 100 for the third consecutive season. The 300th goal was reached with Tony Gray’s first strike at Colwyn Bay. It remains to be seen if the current team can go on to beat last year’s total of 102 and the 2010/11 total of 107. In the Football League the best was 119 in 1964/65 while the club record is a frankly ridiculous 170 set in the Cheshire County League in 1930/31.

Last season Chester was only defeated in four games which equalled the total of the 2003/04 Conference winning side. Although the team that won the 1908/09 Combination championship lost a mere two games they only played 30 matches so it is a bit of an unfair comparison.

It goes without saying that Chester has never won three back to back championships. Previously the club won two on the bounce in 1925/26 and 1926/27. I don’t want to tempt fate but hopefully this record will be beaten.

Following on from my article on March 14th Chester is threatening to completely tear up the record books for the Blue Square North. They have already equalled the 97 point total of Kettering Town in 2007/08 and beaten the same club’s record of 30 wins. The 97 goal total of Alfreton Town and Northwich Victoria has also now been equalled.