A few weeks ago I published a post displaying pictures of the Sealand Road model created by Derek Astbury. Derek is the son of former player Tommy Astbury, who played 303 league games for the clubs in the 1940s and 1950s. He has now re-created a selection of pictures taken from his late father’s collection, the Chester City Images of Sport book and the Chester Football History Facebook page.

Derek Astbury, the son of former Chester player Tommy Astbury, has used lockdown to construct a superb model of the old Sealand Road stadium based on how the ground looked when his father was playing for the club in the 1940s and 1950s. Measuring 6ft by 4ft it took six months to build and it is hoped that it can be shown at the Deva Stadium some time in the future. I would urge anyone to go and see it if the opportunity arises.

Derek explains how he tackled the project:

“I retired just before the first lockdown and during the early months did what most people were doing i.e sort out family photos/ tidy the attic etc. While doing this I came across some old subbuteo equipment and after watching a YouTube programme I discovered there was an internet community of 50-60 year olds revisiting the game.

I decided to buy some players online to paint myself and found that there were some in vintage style kits and the idea was born. I would paint Chester FC from the time that my dad played together with other teams he played against. I thought I could then display them with a programme of the match for example Bolton Wanderers for his testimonial, Hull City (Raich Carter) and Stoke City (Stanley Matthews).

Then I moved on to the Stadium itself which I started to construct on January 21st using 3mm plastic sheet that was destined for the skips where I used to work. I have been building on and off since then on the occasions it has been warm enough in my garage to let my fingers work.

I have had the Images of Sport Book for many years and most of my reference has come from that as well as the Chester Football History Facebook page and my dad’s scrapbooks and photos. I did start to look at photos differently ie not at the subject but at the background details to see what the stands looked like and what adverts were on display. Most of the photographs are taken inside the ground so getting the outside details was quite a struggle. Even people who had been to the ground many times didn’t know what the other side of the Kop looked like.

Some things came as a surprise to me during the build research. One was the office building between the Main Stand and the Barn at the Sealand Road End. Another was the fact that the Popular Side was wider at the Kop end. I only realised this when I saw an aerial shot and had to start again on this stand. I also decided that I had to include the lamppost in front of the plaque on the front wall. Other problems for me were that the photos of the era were in black and white so I had to do some further research on colours (or guess!). The VP Wine advert on the Popular side just looks maroon to me.

It was also important to me that the game of subbuteo still remained playable and the stands were not too big to reach over. This means there are not the correct amount of seats in the stands or steps on the terraces so I couldn’t fill them with the 20,000 spectators that saw the Chelsea FA Cup game. From the positive comments I have received so far I think I have managed to capture the essence of the Sealand Road Stadium.

One of the most interesting items of club memorabilia I have ever seen was recently loaned to Chester FC chairman Tony Durkin.

A 336 page hardback ledger, spanning the period from November 1932 to February 1937, was in the possession of a relative of former clerk and secretary Billy Peters. It makes fascinating reading as it covers board meetings with subjects ranging from club finances and team selection down to travel arrangements and the provision of fire extinguishers.

After my recent articles on Sealand Road there was one item that took my eye. In January 1934 item 2945 referred to the naming of the ground:

Naming of the Ground

“Sec-manager recommended the ground be given a name such as “The Stadium”, Sealand Road, Chester. Resolved on the suggestion of Mr C.J.F. Owen that the Chairman and Sec. Manager use the words The Stadium on posters and letterheads when the public would would follow the lead and accept the title.”

I never appreciated that the ground had formally been entitled “The Stadium” in this way. I had presumed that the name had been adopted by default after its construction in 1906. Given the circumstances I am surprised that such a bland, unimaginative name was endorsed. The naming may have been prompted by the imminent arrival of the Greyhound Stadium, which was built next door the following year, but I would have thought that this would have prompted a more creative title.

Although The Stadium may have been the official name I think it is fair to say that it never fully caught on. I always though of it as Sealand Road and this was always how the ground was known in footballing circles.

With the restoration of the plaque I thought it would be interesting to collate some pictures of other parts of the Sealand Road Stadium that have survived. I am hoping that this will be the first of a number of articles and I would urge anyone to get in contact if they have anything of interest.

The most obvious place to start is the roof of the main stand which was installed at the previously uncovered Hamil Road End of Port Vale’s Vale Park Ground in 1992. According to Simon Inglis’ Football Grounds of Britain book the stand roof was bought from Chester for a bargain price but the final bill for its transport, re-erection and repainting came to £350,000.

Coincidentally the first team to utilise the new covered Hamil Road End was Chester when they played a League Two fixture at the ground in September 1992 and were beaten 2-0. The following photographs were taken by Fraser Warburton at that game and with no adverts or Vale branding the stand still looks very much like it did at Sealand Road.

In 1995, 4,550 seats were installed and Blues fans were able to sit under the stand roof for the first time for a Worthington Cup tie in 1998. Two Luke Beckett goals gave Chester a 2-1 victory in that game. There was a return to the ground the following year in the same competition for that memorable 4-4 draw in Terry Smith’s first game in charge.

The second item was salvaged form the demolition of the ground in 1992 by supporter Alan Potter who managed to carry it back to his house in Blacon which is quite an achievment given its size.

The admission price board was initially in place at the Sealand Road End as can be seen from my accompanying photo.

The final item is a gem from the old wooden Sealand Road stand and is the sign from above the away team dressing room that I was given several years ago.

The installation was completed last week when Art Graphics of Saltney erected an information board alongside the sandstone plaque. This was followed by an unveiling on Saturday before the players embarked on the victory parade to the town hall.

The unveiling was attended by Rob Fleet, who retrieved the broken plaque back in 1992, as well as former ISA chairman George Rogers who had looked after the pieces in recent years. Also present were Pauline Meakins, representing the Chester Exiles who sponsored the information board, as well as Chester FC chairman Tony Durkin and members of the Senior Blues.

Plaque with Information Board 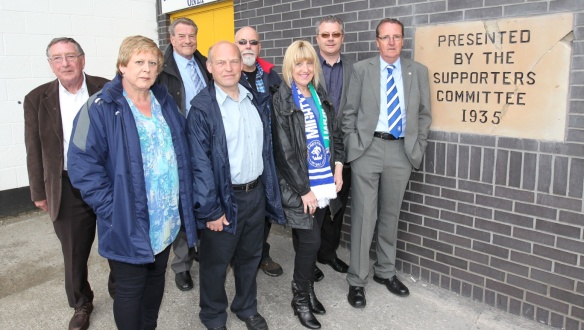 Before the event I was talking to Rob about the “Chester Football Club Limited” lettering that appeared above the plaque (see the picture in the February 1st article) and wondered what had happened to it. I had always thought they were individual letters attached to the wall but Rob says that they were embedded in breeze blocks and they were too big to remove. It begs the question did anyone salvage a letter as a souvenir?

This led me on to another thought. I know that other parts of the ground were salvaged by supporters after the ground’s demolition and I thought it might be a nice idea to put together some photographs and stories in an article. I have already received pictures of the old stand roof in place at Port Vale when it was still distinctly recognisable as coming from Sealand Road.

Unfortunately I missed out on taking pictures of the old stand seats which were used at the Greyhound Stadium in Ellesmere Port. These seats have recently been removed but if anyone has a picture that would be great.

Please get in touch via the message form below if you have anything of interest or just add a comment.