Chester’s final match of the 1992 Scottish tour saw them play out a dull goalless draw against Cowdenbeath at their Central Park ground.

Unlike the other two grounds on the tour Central Park remains and is still shared with stock-car racing. At the time of Chester’s visit the stadium was looking very neglected with untidy fencing and portakabins after half the stand had burnt down earlier in the year.

After the first game of the tour, at East Stirlingshire, a City select eleven faced a team put together by Morrison’s, the company building the new Deva Stadium, the following day. An article and photos of this game will follow.

On Monday, Chester played their second first team fixture of the tour at Dumbarton. The game was played at Boghead Park, another Scottish ground that no longer exists having been vacated in 2000. The match finished 0-0 with City playing in red and manager Harry McNally in plaster after breaking his leg in the friendly the previous day.

Chester’s second pre-season tour to Scotland took in games against East Stirlingshire, Dumbarton and Cowdenbeath along with an unscheduled fixture at Vale of Atholl. The first match was staged at East Stirlingshire’s Firs Park with Chester winning 5-2. Eddie Bishop scored a hat-trick with the other two goals scored by Stuart Rimmer and John Kelly.

East Stirlingshire vacated Firs Park in 2008 and it was demolished in 2012.

Following the game at Berwick Rangers on the Saturday Chester travelled up to East Fife for a Monday night fixture. Chester won the game 3-1 with goals from Neil Ellis, Graham Barrow and Carl Dale.

The game was played at Bayview Park which was vacated in 1998. East fife now play at the Bayview Stadium.

I couldn’t attend the final game of the tour at Meadowbank Thistle so unfortunately I have no photos of the game.

In August 1990 Chester embarked on their tour to Scotland with games against Berwick Rangers, East Fife and Meadowbank Thistle. The first match at Berwick ended 1-1 with Carl Dale scoring for Chester.

These are my photos taken at Berwick’s Shielfield Park. This gallery is of interest for lovers of old photos of football grounds rather than being specifically Chester related.

One of the most interesting items of club memorabilia I have ever seen was recently loaned to Chester FC chairman Tony Durkin.

A 336 page hardback ledger, spanning the period from November 1932 to February 1937, was in the possession of a relative of former clerk and secretary Billy Peters. It makes fascinating reading as it covers board meetings with subjects ranging from club finances and team selection down to travel arrangements and the provision of fire extinguishers.

After my recent articles on Sealand Road there was one item that took my eye. In January 1934 item 2945 referred to the naming of the ground:

Naming of the Ground

“Sec-manager recommended the ground be given a name such as “The Stadium”, Sealand Road, Chester. Resolved on the suggestion of Mr C.J.F. Owen that the Chairman and Sec. Manager use the words The Stadium on posters and letterheads when the public would would follow the lead and accept the title.”

I never appreciated that the ground had formally been entitled “The Stadium” in this way. I had presumed that the name had been adopted by default after its construction in 1906. Given the circumstances I am surprised that such a bland, unimaginative name was endorsed. The naming may have been prompted by the imminent arrival of the Greyhound Stadium, which was built next door the following year, but I would have thought that this would have prompted a more creative title. 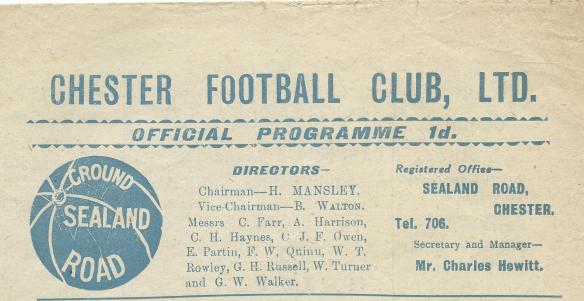 Although The Stadium may have been the official name I think it is fair to say that it never fully caught on. I always though of it as Sealand Road and this was always how the ground was known in footballing circles. 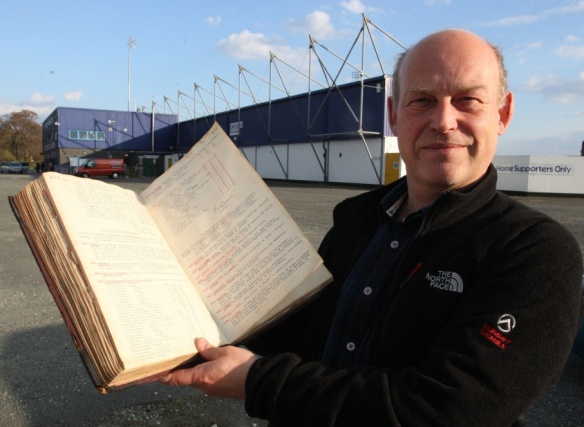 With the restoration of the plaque I thought it would be interesting to collate some pictures of other parts of the Sealand Road Stadium that have survived. I am hoping that this will be the first of a number of articles and I would urge anyone to get in contact if they have anything of interest.

The most obvious place to start is the roof of the main stand which was installed at the previously uncovered Hamil Road End of Port Vale’s Vale Park Ground in 1992. According to Simon Inglis’ Football Grounds of Britain book the stand roof was bought from Chester for a bargain price but the final bill for its transport, re-erection and repainting came to £350,000.

Coincidentally the first team to utilise the new covered Hamil Road End was Chester when they played a League Two fixture at the ground in September 1992 and were beaten 2-0. The following photographs were taken by Fraser Warburton at that game and with no adverts or Vale branding the stand still looks very much like it did at Sealand Road. 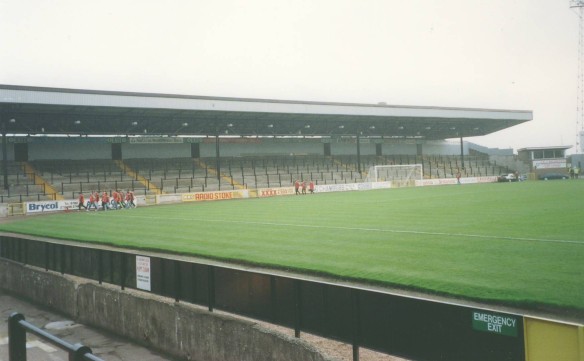 Corner of the stand at Vale Park
Copyright © Fraser Warburton 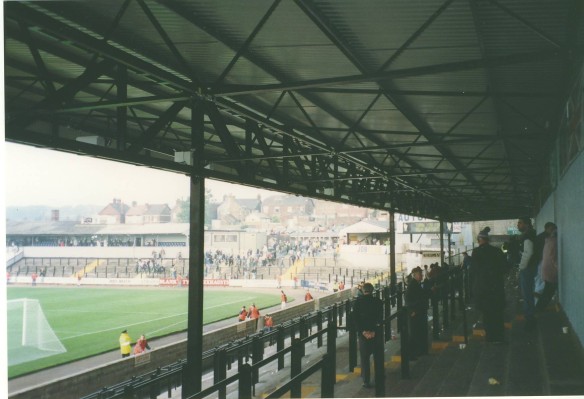 In 1995, 4,550 seats were installed and Blues fans were able to sit under the stand roof for the first time for a Worthington Cup tie in 1998. Two Luke Beckett goals gave Chester a 2-1 victory in that game. There was a return to the ground the following year in the same competition for that memorable 4-4 draw in Terry Smith’s first game in charge. 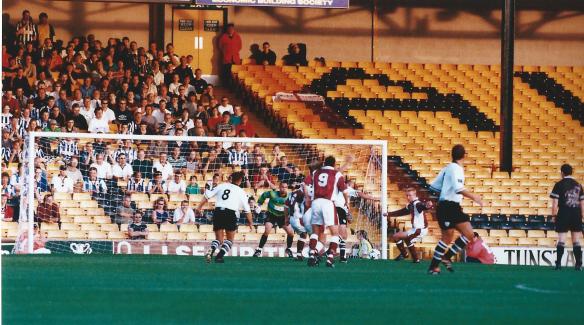 The second item was salvaged form the demolition of the ground in 1992 by supporter Alan Potter who managed to carry it back to his house in Blacon which is quite an achievment given its size.

The admission price board was initially in place at the Sealand Road End as can be seen from my accompanying photo.

The entrance sign in its original location
Copyright © http://www.chesterfootballhistory.com

The final item is a gem from the old wooden Sealand Road stand and is the sign from above the away team dressing room that I was given several years ago.