I came across a couple of fascinating photographs of the old Sealand Road ground recently and would like to thank former Manweb employee, Peter Thomas, for allowing me to use them. Peter’s pictures were taken from the top of the old Manweb building which was itself demolished at the turn of the century. I’ve added a couple of my own pictures, taken in 1990, which also show the outside of the ground from a slightly different viewpoint.

The two Manweb pictures show the view looking up Sealand Road towards the city centre. The patch of green on the left of Sealand Road is the Greyhound Stadium with the old football ground just above it. I think that the pictures were taken in the mid 1970s based on the work that appears to be taking place between the two stadiums. I believe that this is the construction of the small industrial estate that was built following the sale of the old training annexe in 1973. It also appears as if the picture was taken before the new office block was built at the front of the ground, around the time of promotion in 1975. You can just make out the old wooden office at the corner of the Main Stand and Sealand Road End. The old wooden main stand was replaced in 1979.

The Greyhound Stadium was itself demolished around 1986 while the football ground was vacated in 1990 and then eventually knocked down in 1992. 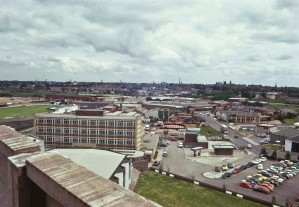 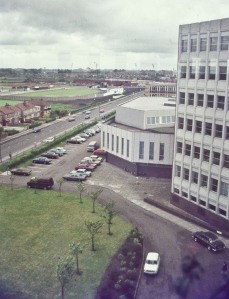 The third picture was taken from the inner ring-road in spring 1990 and shows how much the old ground used to stand out on the skyline. 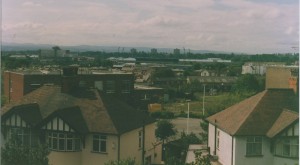 The final picture is taken from Bumpers Lane before the final game against Rotherham United in April 1990.

If anyone else has any further thoughts on the dates of the photos taken from the top of the Manweb building I would be interested to hear any comments.